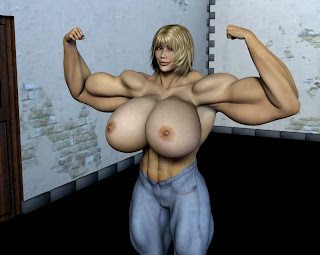 Making slow but steady progress on the Helga muscle comic.  The arc of comic creation usually goes something like this for me.

Stage 0: Come up with a rough story idea. This takes a day

Stage 1: cobble together all the models/sets etc for the main scene in the comic and get that all set up.  This often takes a couple of days


I'm well into stage 2 for this comic.  I will finish it as soon as I can.  The basic storyline is that there's a bar where there are fist fights on Friday nights.  People can bet on the fights and the fighters are just whoever wants to come and fight

Will be posting this comic to strongandstacked.com as soon as I finish it
Posted by greycat at 9:00 AM No comments: 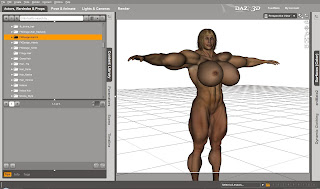 There's a fairly new model from HiveWire3D named Dawn that came out recently . I bought Dawn a month or so back, but haven't made any comics with her yet.

For the next comic I post on strongandstacked, I'd initially thought I'd just post a continuation issue of the Queen Cyborgia comic

But I've been wanting to try out Dawn and so I'm going to do a comic using her.  You can see in the picture here that when I pump up the Dawn model with huge tits and large muscles, she does look formidable.  Unfortunately I'm not set up to give her a hyper muscled look.  The muscle morphs I bought for her are maxed out in the photo you see here

Over time I'll try to pump up her muscles more, but for now this is the level I can get to .  My plan is to use this Dawn model in the comic I'm working on right now for Strong and Stacked.  She's going to be a muscle girl named Helga
Posted by greycat at 9:02 AM No comments:

Back in the late 1990s, I remember watching a show called Fuera de Serie. I can't speak Spanish at all so I couldn't really understand what was being said in the show. 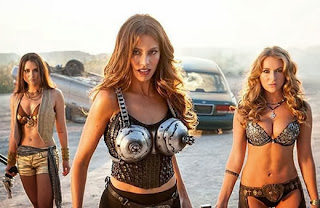 Fast forward to 2013 and Sofia's in a new movie called Machete Kills.  She's still got the tits, but now she's sporting what she calls "My Double Ds".  Literally a "bullet bra" that has two machine guns mounted on it

Rock on, Sofia!
Posted by greycat at 8:50 AM No comments: 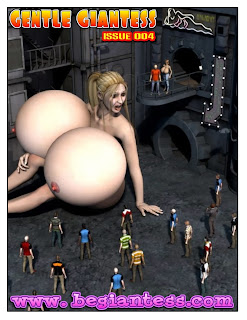 I just posted the fourth issue of Gentle Giantess to begiantess.com .  It took me a long time to finish this one for a few reasons.

First off, my day job has continued to use up a lot of my time.  Secondly, I tried doing some scenes with lots of guys in them for this comic.

I'd wanted to try that for a while - having a bunch of men climbing on a giantess.  It turns out it takes a long time to pose all those figures 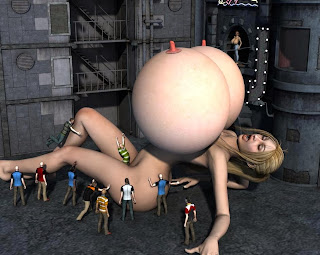 As far as the story goes, I basically had Carolyn at the mercy of all these men and had her confused about how she felt. The sensuality of her new giantess body and huge boobs is overwhelming to her when she's stimulated erotically

I'm not sure if the story all came together cohesively the way I'd wanted it to.  But in doing this one benefit is that I now know how to get lots of figures into the scene.  I'll try and do that more and more often in giantess comics I make

As far as the next giantess comic on the horizon, I'll either do another Gentle Giantess issue or revisit one of the earlier comic series - haven't decided yet.
Posted by greycat at 9:22 PM No comments: 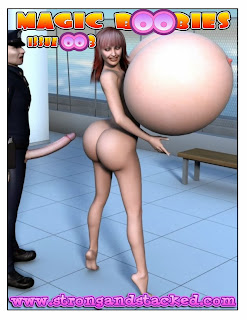 I uploaded the third issue of Magic Boobies to http://www.strongandstacked.com today.

For much of the month of September, my day job was taking a lot of time.  Things have thankfully slowed up a bit so that I can spend more time on strongandstacked.com and begiantess.com

For this Magic Boobies comic, I wanted to focus on Sarah and introduce a new character - a talking cat named Shadow .

If people like the Magic Boobies saga, I'll keep going with it. I do have a lot of ideas about where the direction of the story can go 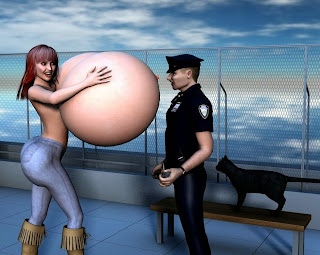 Posted by greycat at 8:37 PM No comments: