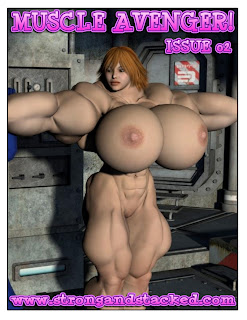 Muscle Avenger was a comic I did about a year ago involving FMG.  It was a story of a crazed futuristic she-nazi named the UberFrau who was seeking ways to increase her own already monstrous strength by experimenting on human test subjects.

One of her test subjects ended up taking a fistful of strength enhancing pills and pumped up into... the Muscle Avenger!

That's where the first issue ended, and I never got back to it.  Until now.  What spurred me to create a second issue was an email from a member of Strong and Stackedwho requested that I get back to the story.  That member said he enjoyed stories where evil villains got their comeuppance.

And so I decided to make a second issue of Muscle Avenger.  I had visions in my head of the Muscle Avenger going toe to toe with the Uberfrau.  And I do want that to happen. 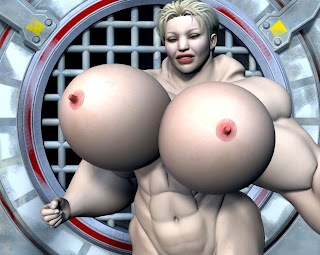 But as I began working on the comic, and the days went by, I realized it was going to be hard to get the storyline along to a point where the two muscled women would meet in combat.  So I did what I could.  I spent a full weekend creating renders that picked up the storyline.

One thing that took me some preparation time was revamping the Uberfrau's look.  She'd been done using the Victoria 3 model in issue 1.  I wanted to use Victoria 4 for her this time out.  So I used the spherical tits prop I'd created plus V4 to make the Uberfrau this time.

I also revamped the Muscle Avenger a bit.  She'd largely been based on the She Freak 4 model for the first issue.  And that's pretty much true this time out, but I also used some other muscle morphs to bulk her up a bit more

With Muscle Avenger 2 finished, I have to decide what to work on next. I think logically it has to be a new comic for http://www.begiantess.com because I haven't posted an update there in a while.
Posted by greycat at 9:12 PM 1 comment:

I recently got an email from a member of Strong and Stacked asking whether I was planning on continuing the story line of the Muscle Avenger FMG comic that I'd done a while back.

As in many of the comics I've done, the issue ended with the Muscle Avenger pumped up and ready for action, but a second issue never came.  The email I got mentioned that the site member really enjoyed comics where villains get their come uppance.  And he wanted to know if the Muscle Avenger saga would continue, so that the avenger could take down the Uberfrau.

This inspired me to go ahead and do a second issue of Muscle Avenger.  I'm working on it right now.  As I set up to do issue #2 of Muscle Avenger, I realized that I wanted to give Uberfrau an overhaul.  For issue #1, I'd used Victoria 3 as the model for the uberfrau.  Victoria 3 is a model for Poser and Daz Studio which saw a lot of use over the years, but her heyday has kind of come and gone, and she doesn't have the fine detailing that Victoria 4 has.  So I decided to migrate Uberfrau to be based on Victoria 4 instead of Victoria 3.

My first iteration on Uberfrau with Victoria 4 + my spherical tits prop had Uberfrau with boobs that were maybe a bit too big.  Well, can they ever really be too big?  Since this is a comic for muscle women fans, I decided I'd better dial Uberfrau's boob size back just a bit so that her boobs wouldn't overshadow the size of her muscles.

After tweaking the size of her tits to be slightly less epic, I now have an Uberfrau based on Victoria 4 that is ready to go for the second issue comic.  I may play around a bit with muscle displacement maps for her to see if I can bring out her muscles a bit more.

As for the Muscle Avenger, she was based on Victoria 4 even in the first issue.  So I can just use her as is.

I'm hoping to get this comic done within the next couple of days, and then I'm planning on working on a giantess comic for begiantess.com next. 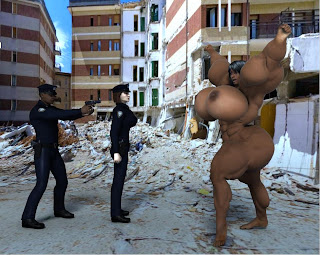 This past week and a half has gone very slowly for me as far as being able to make progress on site content.  There are the usual factors at play.

On the home front, various other things were going on this week and it all added up to me not getting as much time to work on content as I would have liked to have had.

But I did manage to make incremental progress on many days on an FMG comic I'll be posting to strongandstacked.com today. 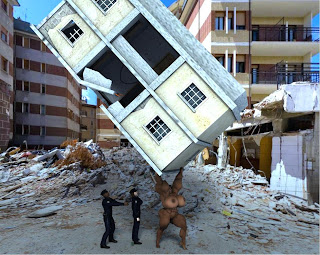 The comic is called Shannon Strong, and its about a police woman who gets super strength.  I've done Police themed FMG stories before.  But for this one, I wanted the main character to be a black woman.

I also recently bought some low polygon count police figures from daz3d.com and I wanted to use those.  So the secondary characters in the story were created using those police models.

With this comic now in the bag, I need to get something done for begiantess.com. And then quickly circle back to strongandstacked.com for another fmg comic.

I say quickly, and I hope it will go quick, but we'll see how that turns out.  One idea I am currently working on for strongandstacked has to do with an asian woman character who is short in stature - about 5 foot 2 - but who develops an incredibly muscled physique.  She's inspired by a woman who works at my company.  The woman isn't very muscular, but she is asian and about 5 foot 2, and from a tits and ass perspective, God is she built.

I think she really stands out to me because many asian women are beautiful but petite - slender and graceful.  My coworker isn't very tall, and it's not that she's overweight, she's just a brickhouse.  Big boobs and a nice full ass, and she actually dresses to show that off.  Tight jeans and shirts that really make her boobs look big.  The other interesting thing about her is that she's not especially beautiful as far as her face goes.  She wears glasses and she's probably about 40 years old or so.  But god that body...

So anyway she has inspired a character I'm working on who is a short asian who starts with a nice ass and big boobs but then grows huge muscles.

That's all for now - keep an eye on the websites for new content soon.
Posted by greycat at 8:30 AM No comments: 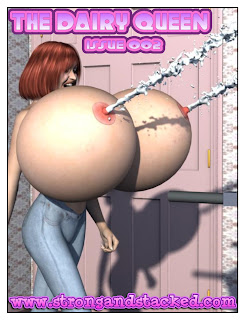 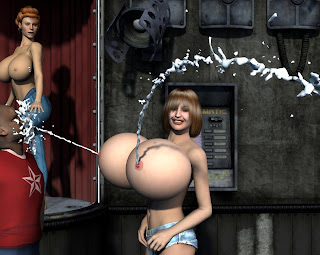 I just finished the second issue of The Dairy Queen BE comic and will post it to Strong and Stacked today.

If I were strictly following a pattern of FMG comic then Giantess Comic then BE comic then FMG comic... then really I should have created an FMG comic for strong and stacked.  But I had the Dairy Queen comic all set up in daz studio for more rendering so I decided to push ahead and just do it.

To make up for having two be comics in a row, I may try to do two FMG comics in a row.  But for the rest of today at least I don't have any time to work on stuff for my websites as we have some friends coming over.

Tomorrow I should get some more time and will start work on something new - probably an FMG comic.
Posted by greycat at 10:14 AM No comments:

Working On BE Comic

A couple of days ago, I finished and posted a giantess comic to BEGiantess.com.  So now I need to get back to strongandstacked.com and post something there.

I'd initially thought I would be doing an FMG comic next - and that probably should actually be next.  But I had some ideas about doing another issue in the Dairy Queen comic series and so I am working on that.

I don't have an actual animation in the comic I am working on, but in making the comic I did put together a breast expansion progression and did a short draft animation while doing that.  You can see that right here as an animated gif

I'm working on the BE/milk Dairy Queen comic right now.  As soon as it is done, I'll post it and then work on the next FMG comic for strongandstacked.com next.
Posted by greycat at 9:09 PM 1 comment: 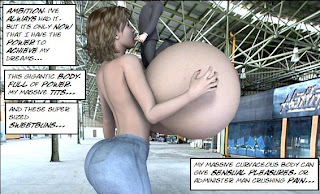 This weekend I've been working on a comic for my BEGiantess site.  It's the third issue in the Buns-N-Boobs giantess comic series.

The main character is named Judy Summers.  In the first issue she grew into a massively boobed giantess with a bubble butt.  And since then she's been using her huge size, boobs and butt to get what she wants.

I've been trying to get this finished so I can then get back to making a second FMG comic for strongandstacked. 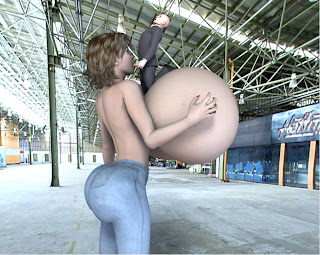 And then I need to make another giantess comic and another be comic and...

You get the picture.  Just figured I'd post what I'm up to right now.  Hoping to get this comic done before the end of today
Posted by greycat at 10:01 AM No comments:

I recently uploaded a short FMG comic to strongandstacked.com and wanted to follow that up right away with a longer sequel comic to it, and then frantically crank out a comic for begiantess.com.

One quick thing I did today though is that I loaded up on some cheap 3d content (models etc) that I can use for future comics because renderosity.com is having a sale on a bunch of items for $3.50 each.

If you're into getting Poser/Daz Studio content like I need to be to fuel the content library I have for making comics and animations, you may want to check out the sale they are currently having http://www.renderosity.com/clearance-items-for-just-3-50---extended--cms-16605

I loaded up on a bunch of stuff which I plan to put to good use in upcoming stuff.
Posted by greycat at 9:24 AM No comments: